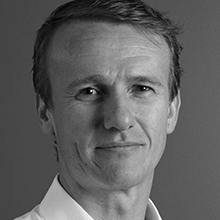 Sean holds a Bachelor of Science (BSc), Dual Major – Physiology and Biomedical Science, First Class Honours – Developmental Neurobiology, Bachelor of Medicine, Bachelor of Surgery (MBBS). Prior to founding Ellume, Sean was a busy intensive care and emergency specialist in a large Brisbane hospital, inundated with admissions during the swine flu epidemic of 2008-9.

Many patients needed to know, quickly and unequivocally, whether they had the flu; that information could have curtailed the spread. Some, including a previously-healthy teenage boy, had died. Sean urgently needed a diagnostic tool that did not exist yet: a fast, accurate, robust and non-invasive way to diagnose infectious disease in a clinic, home or ward.

Trailblazers From the Digital Frontier