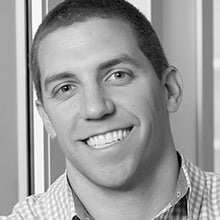 Eddie co-founded Akili in 2011. Prior to his leading Akili, Eddie helped launch PureTech Health’s digital health initiative and co-founded two other health-focused start-ups. He was previously a Kauffman Entrepreneur Fellow, a program sponsored by the Kauffman Foundation of Kansas City, MO, focused on healthcare entrepreneurship. Prior to that, Eddie completed his graduate work at Yale University in the Departments of Pharmacology and Molecular Biophysics & Biochemistry, focusing on structure-based drug design, where he led a research project that identified two novel chemical scaffolds as proof-of-concept compounds for novel therapy. Eddie received his B.S. in Biochemistry from Providence College, and his M.Phil. and Ph.D. from Yale University.

Akili has received numerous awards and recognition, including the #1 health company in Entrepreneur magazine’s 100 Brilliant Companies of 2016 and the CNS Summit 2017 Innovation Award.

Unleashing the Power of Innovation on the Next Decade