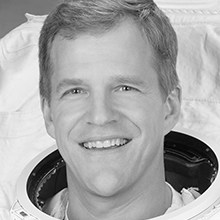 Scott is a Stanford and Harvard-trained physician-turned-astronaut and serial entrepreneur. He developed the core IP for Fluidity Technologies, but saw his patent languishing on a research institute tech transfer website. Clearly understanding the global impact of his technology, he formed and seeded a company around it in January of 2016. Through additional angel investment, tremendous continuing engineering development and the onboarding of a stellar management team, the company is poised to become a major technology platform for anything that moves through physical or virtual space, beginning with drone flight.

Scott is a veteran of 5 space shuttle flights and 7 spacewalks, including serving as Senator John Glenn’s physician on STS-95 and leading the STS-120 spacewalking team, which featured the dramatic repair of a live solar array. He was inducted into the US Astronaut Hall of Fame in 2016. He is also a prolific inventor/product developer, entrepreneur, leader and board member.