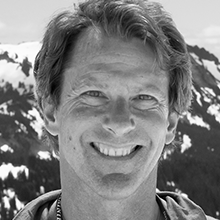 50-year-old Win Whittaker has been a mountain guide at RMI Expeditions since 1982, summiting Mount Rainier over 185 times.

With hearing loss Win attributes to an early love of fireworks and rock and roll, he has just been fitted with ReSound LiNX 3D, the latest hearing aid technology from GN Hearing. His devices allow him to stream music and phone calls, personalize his hearing aid settings through an app and, for the first time, use a new telemedicine function with comprehensive remote fine-tuning, using the cloud to connect his hearing aids with his doctor. Win can use an app to share requests that his doctor in Seattle can then make and push them back to him, whether he’s at the family lodge, a mountain base camp, or leading an expedition on the other side of the world. That’s a big deal to people who rely on their hearing aids to reliably communicate with the people around them – or just hear their music with more rich tones.